Our goal is to provide a service that meets the needs of our customers and improves the environment.

Please, browse our website and see how we may be of service to you!

West Ridge Court Sanitary Sewer Rehabilitation Project Stafford County Public Works Utility Division responded to a customer complaint of a sinkhole in her backyard. The responding crew arrived to find a 6’ diameter, 6’ deep sinkhole, in a heavily landscaped and hardscaped backyard, directly over an 18” Asbestos Cement Interceptor. Upon investigating the scene it was determined that the 18” ACP line had collapsed, however the sewer was contained in the sinkhole, and there was no SSO. An emergency pump and haul operation was immediately enacted, until a pump around could be established. Two Pump Stations were temporarily taken off line to reduce flow on the interceptor. Excavation equipment was mobilized, while the responding crew began to disassemble fences to allow access to the site.

After plugging the Interceptor pipe, crews began excavating the sinkhole. The crew faced several obstacles including an above ground swimming pool encroaching on the easement, a large permanent shed within 5’ of the easement, and the homeowner’s house, which was within 15’ of the Interceptor. All of these obstacles hampered excavation, and forced the crew to use a skid steer to relocate the excavation spoil. Additionally the ground was primarily composed of Type-C fill dirt, with no stability, leading to several collapses of the excavation pit. These conditions were exacerbated by heavy rains from hurricane and tropical storm activity off the coast. The Homeowner’s swimming pool was drained to reduce surface encumbrance, as well as to provide additional site safety.

With trench shoring in place, crew members were able to enter the excavation pit and begin clearing around the collapsed section of pipe. It was determined that the crown of the pipe was structurally compromised by hydrogen sulfide gas. Pipe was removed from the upstream manhole, and the crews began digging back on the pipe, to find structurally sound pipe in order to make a repair. The crew followed the pipe to the limits they could safely excavate, without undermining the permanent shed, failing to find sound pipe. By the end of the day, excavation was halted. The crew secured the site, and began considering options. CIPP Lining, HDPE Slip Lining, Pipe Bursting, as well as traditional open cut and replacement were all considered options. Due to limited space and access, open cut was considered a last resort option. 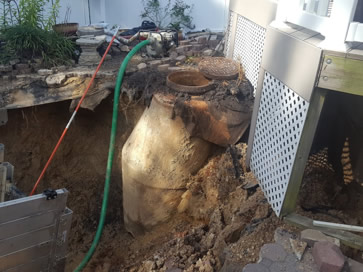 After several discussions, Stafford County chose CIPP Lining as their primary repair plan and Tri-State Utilities was contacted to assess the feasibility of lining. After reviewing the CCTV footage as well as the site, Tri-State Utilities determined that it would be possible to line the selected runs, and recommended an air inversion and steam cure of the 18” CIPP liner. The job was scheduled, and Tri-State personnel arrived to begin their own cleaning and CCTV operations.

CCTV revealed the pipe to be in poor condition, with cracks, heavy delamination, and spauling of material throughout the pipe. This data was instrumental in the decision to continue with the bypass, even though a temporary repair was in place. In all, 3 sections of Interceptor were selected for CIPP Lining (the compromised repair section, a short 30 foot section upstream, as well as the immediate downstream run.)

A repositioning of the 24” plug was necessary to facilitate the first lining of the repaired run as well as the upstream run. When the plug was removed from the upstream run, the top of the 18” ACP collapsed, confirming that both the decision to maintain the bypass, as well as to line that additional 30’ of pipe had been correct. The debris was removed, and the lining was successful. The plug was inserted back into the newly lined pipe without incident. The downstream run was successfully lined the following day. With the pipes successfully lined and the bypass in place, some rehabilitation and I&I issues were addressed in both the upstream and downstream manholes. 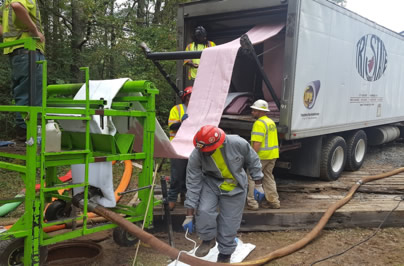 The bypass was terminated and the restoration of the site began, bringing the most difficult emergency repair ever completed in Stafford County to its final phase. CIPP Lining was the ideal solution to a complex problem. 436’ of 18″ pipe was rehabilitated with Cured-In-Place Pipe at 1/3 the cost of open cut and replacement of the 170’ pipeline that initially collapsed. The total rehabilitation of the pipeline was just under $50,000 where an open cut alternative would have been about $440.00 per LF for a total cost of $190,000. 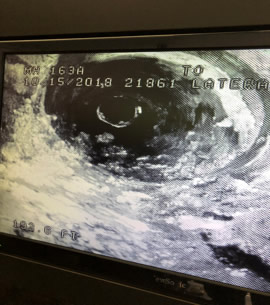