Our goal is to provide a service that meets the needs of our customers and improves the environment.

Please, browse our website and see how we may be of service to you! 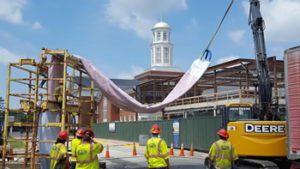 Tri-State Utilities subcontracted from W.M. Jordan to rehabilitate and reinforce 267 lf of 60” RCP with a CIPP Liner under the new addition of the CNU – Trible Library. The result has been a like new finished pipe in a continuous form, fitting tight to the host pipe with an expected life span of at least 50 years. The liner was designed to structurally support all the environmental loads which could affect the liner.

Jeff Ambrose, Superintendent for W.M. Jordan, stated: “It was a pleasure to have Nathan and the entire Tri-State Utilities’ crew on this project. They were professional and dedicated to providing a quality installation.”